During our introductory week the always impressive Hanna Baragh from the Israeli peace organisation Machsom Watch told us that in order to remain sane during our three months here, we need to ‘turn off our brains’, meaning letting go of the internalised logic we use to orient ourselves in our daily lives. Today I’m confused. I’m not quite sure whether today’s  experiences is a result of having done as Hanna Baragh told us to, or a consequence of not having done so. So, what exactly happened today?

The day started with a visit to the village an Nizan, just a short distance from the southern border of the West Bank. The villagers want to improve the road because it gets all muddy and soft during the rain season. But they are afraid of being attacked by settlers from the nearby settlement of Sho’a if they are seen working on the road, or being stopped by the army because this is Area C, and in Area C no

Palestinian will get a permission to build or repair anything. But the main reason for not going for a road repair is this: A month ago they received a new house as a gift from an NGO called Action against Hunger. A very nice house with a metal framework and nice chipboards on the walls. Two men invited us into the house for tea, clearly proud of the new acquisition. I felt happ

y for them and did not realise
the absurdity of the situation until we were about to leave and saw that the entire house was placed within a big tent – in an attempt to hide it from the army, who would arrive with bulldosers to demolish it if they knew. This is the reality in Area C: no Palestinian gets permit to build or repair anything. Everything in life is relative, it seems. Even happiness and dignity.

Back in the car Abed suggested that we should go and meet Abu Safi, living in a cave with his family, very close to the so called green line from 1967. We had to drive off-road for quite a while beside a dried out creek, and eve

ntually we arrived at collection of metal sheds and en enormous number of plastic and metal barrels. After having discarded my first thought that this was an unusually dramat

ic example of the Palestinian relation to garbage, I recognised the surroundings as the home of a dedicated collector, you surely know one yourself, the one who is convinced that everything is worth saving and can be used or transformed into something useful. We had to wait for a while because Abu Safi was on his way home from a visit to Yatta. He and his son arrived on a tractor with a wagon filled with ten new blue plastic barrels. I found this both weird and amusing at the same time. We asked what he was going to use the barrels for, and his answer was: to store seeds of barley and other corn types. He proudly took off the lid of one of the barrels and showed us seeds he had stored for ten years. And the metal barrels? Abu Safi just pointed his finger to some houses across the creek. Metal walls. Very expensive to buy.

We were invited to climb some 50 meters up a steep hill to the terrace outside his cave, excused himself and went inside for a wash, change of clothes and his prayers. Having finished this he came out to us in a perfectly white jalabiya and white kaffiyeh. Very smart. His son had

already brought us sweet tea, and we had had time to admire his own kind of ‘christmas tree’, full of decorative things like old watches, audio cables and wheels. I felt I was becoming more an

d more attached to this strange guy. After tea he declared that we had to eat with him. Saying no would be an offence. “It is our tradition to offer food to anyone who comes to visit in my home”. His tone 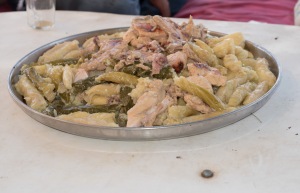 of voice was conclu
sive. Children of different ages started to appear and the son brought a large tray of chicken and rice in cabbage leaves and vine leaves. And sharak, my favourite thin Bedouin bread. It 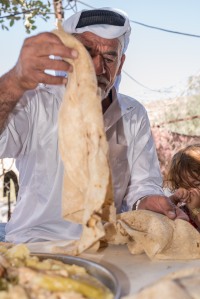 all felt so good, being in an oasis.

During the meal Abu Safi told us he had tree wives and 18 children. Wife no 1 and 2 had been sent to live in Yatta, while no 3 was living with him in the cave with their five children. By the way, he was now looking for a fourth wife. My liking for the man was a bit shaken by these statements, but his great charm got the better of me and I was soon back into this rare bubble of bliss. The go

emade cradle. She was absolutely adorable and
made me miss my own grandchildren intensely. Even that was a good feeling in this place. Abu Safi told us about his 11 siblings, all born in this same cave, as his father was. One brother owns several health food stores in Edinburgh, one is living in the US, one in Saudi Arabia and another a doctor in Egypt. “I’m the donkey in the family”, he said, roaring with laughter. When about to leave this statement was accentuated by the donkey and baby donkey in a shed by the car. My teammate Jacques had already taken our seats in the car when Abu Safi yelled at us and asked if w 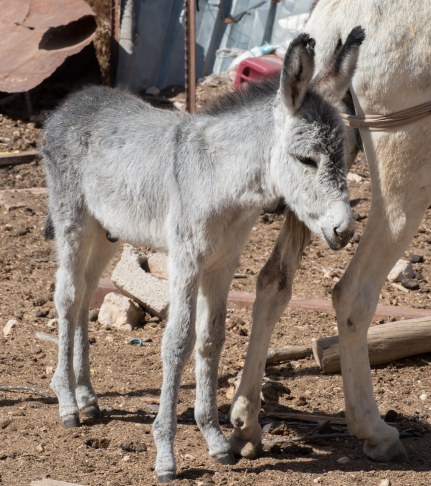 e could take his wife to Yatta. We said of course OK, but were not prepared for the number of passengers. I was in the back seat and felt a bit crowded by a not so tiny wife and her four daughters. Luckily I got to have the little five month old on my lap for the half hour drive without seatbelts, and very off road. By the time we reached Yatta the girl was sucking my thumb, making all sorts of nice voices. I was happy.

It was only when back in the apartment I started to realise that there was something totally wrong with the context surrounding this happy caveman, his family and his happy visitors. All his animal sheds with home-made flattened steel drum walls, solar panels and water cisterns have a standing demolition order from the military office for civilian affairs. Palestinians are not allowed to build on their own land in Area C. The demolition orders have been frozen in court since many years, but can be effectuated at any given time. Aggressive settlers visit from time to time and destroy buildings. He has lived under occupation nearly all his life. The emotional dilemma for me is to find out if the happiness I felt in Abu Safi’s very special garden of Eden was false, given the desperately repressive and destructive context the state of Israel has posed on him. I go to sleep thinking about the unbearable relativity of happiness.

One thought on “The unbearable relativity of happiness”

After retiring from academic and educational publishing I have become a volunteer working for a just peace for the Palestinian people (eappi.org) and reaching out to refugees fleeing the horrors of war (drapenihavet.no)